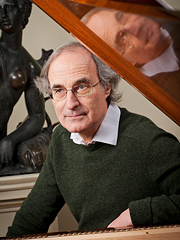 „My aim is to produce first-class restorations and reproductions of eighteenth and early nineteenth century fortepianos.”

1967: family emigrated to New Zealand. Completed secondary schooling and university (Canturbury and Auckland) graduating with a Performance Diploma in organ in 1976.

1977-81: Four-year apprenticeship in organ building in the workshop of Patrick Collon in Brussels, followed by a further 18 months in the harpsichord workshop of David Ley in Maintenon, France, and the fortepiano workshop of Christopher Clarke in Veron, France.

1984: Moved with his wife and two children to Oberndorf bei Salzburg, Austria, to set up own workshop specialising in the restoration and building of Viennese pianos of the late 18th and early 19th centuries.